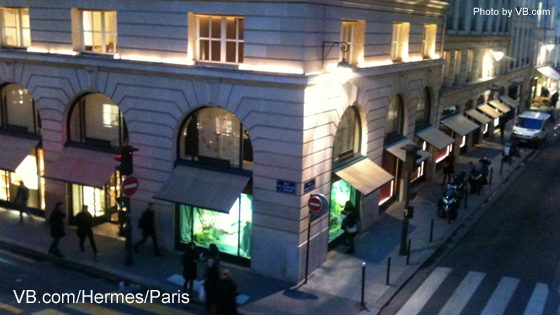 The Hermes opened on 24 Rue du Faubourg Saint Honoré
in 1880 as a workshop.
In 1889 opened the Hermes Boutique.

The store was initially rented by Charles Emile Hermes,
years later his son Emile Maurice Hermes was able to buy
the real estate.

In 1978, Hermes is able to buy the neighboring building
on n°26 and the store can be enlarged.

In 1992 most of the workshops leave the building
and move to Pantin in the north east of Paris.
The shop gets reorganized and women's clothing occupy the ground floor
while men's clothing go to the second floor.


2007, the Boutique gets enlarged again
and extended to n°28 rue du Faubourg Saint Honoré.
With 1,700 m2 it is the largest Hermes store.


It is a landmark on the famous rue du Faubourg Saint Honoré
steps from rue Royale and very close to the Champs Elysees.

more about Paris
via Phonebook of Paris.com