VB.com Internet Hall of Fame - timeline
There are only 676 Two Letter Domains !
They were registered at the dawn of the Internet
and they are among the World´s most valuable virtual Real Estate
Alphabetical
Everything about 2 Letter Domains by Dofo


Under Armour (UA.com) Pop Up Store at Cremerie de Paris, home of VB.com

The idea to create the VB.com Internet Hall of Fame
was born in the first Cybercafe that existed in Paris,
today Cremerie de Paris.com.
It is published as it might interests the one or the other
to find out more about
the WorldÂ´s shortest and most prestigeous Internet Addresses.

David Packard (founder of HP)
and the internet people of Texas Instruments or General Electric,
they were years ahead of their time and they paid almost nothing
for something that nobody understood
and that would become extremely valuable.


- others like Deutsche Bank / DB.com, H&M / HM.com or Calvin Klein / CK.com paid "peanuts"
and bought the missed domains during the early years of the Internet,
still .... years ahead of their time.

- others like Liverpool Victoria / LV.com or LG Group / LG.com paid serious Money at a later time
still managing to make their Logos "Internet Age compatible"
... all these companies they are now in the Internet Hall of Fame.

- and others like Louis Vuitton / no LV.com or Deutsche Bahn / no DB.com
were very slow ... too slow and inefficient to understand the Coming of the Internet,
... they missed the initial Domain Registration .... at a time nobody knew
... they missed to once exisiting Opportunity to buy the Domain .... at a time Internet was in everybodies mind
... and they continue spending massive amounts of Money to advertise a Monogram, which they do not own .com
those are .... years behind of their time


The super short .com Domains have enormous Prestige,
they have been registered one by one .... at a time almost nobody knew about the Internet.
In most cases they were very hard to get .... and the companies in the Hall of Fame deserve to be there. 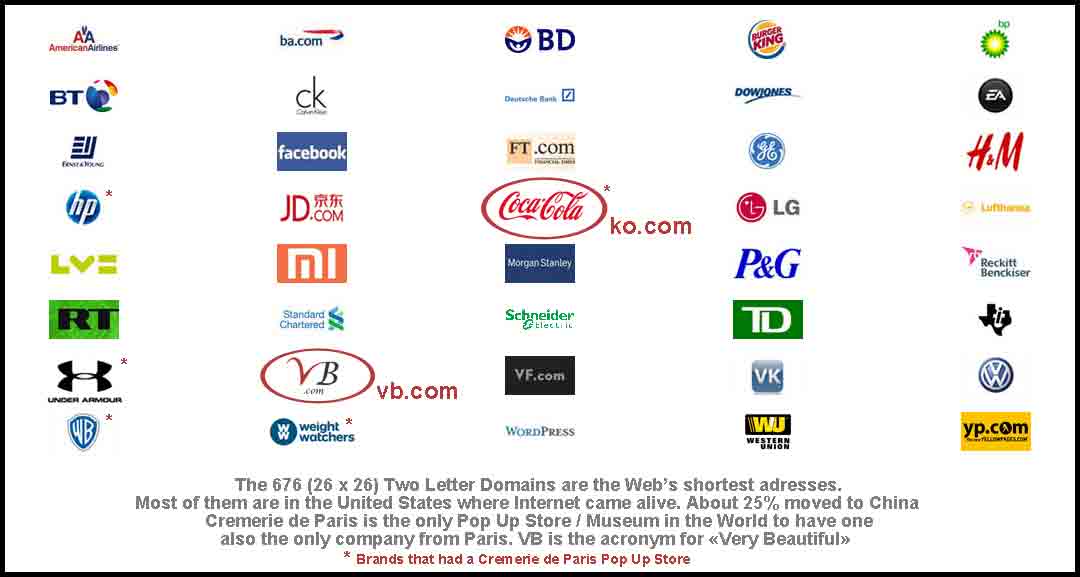 In case you have interesting info
to complete this list please contact Cremerie de Paris
mail: b "at" vb.com
or instagram:cremeriedeparis
or linkedin