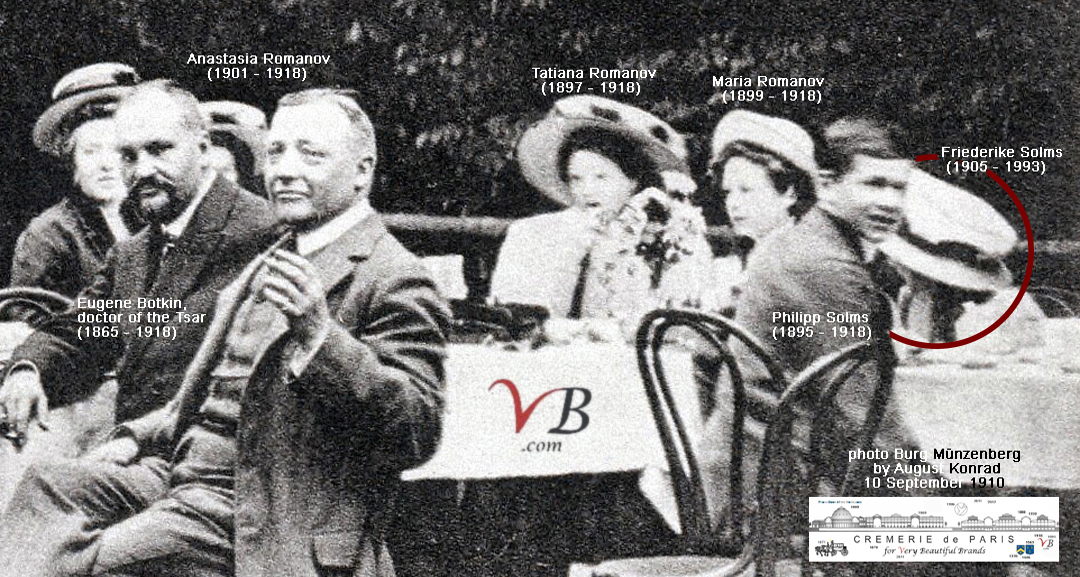 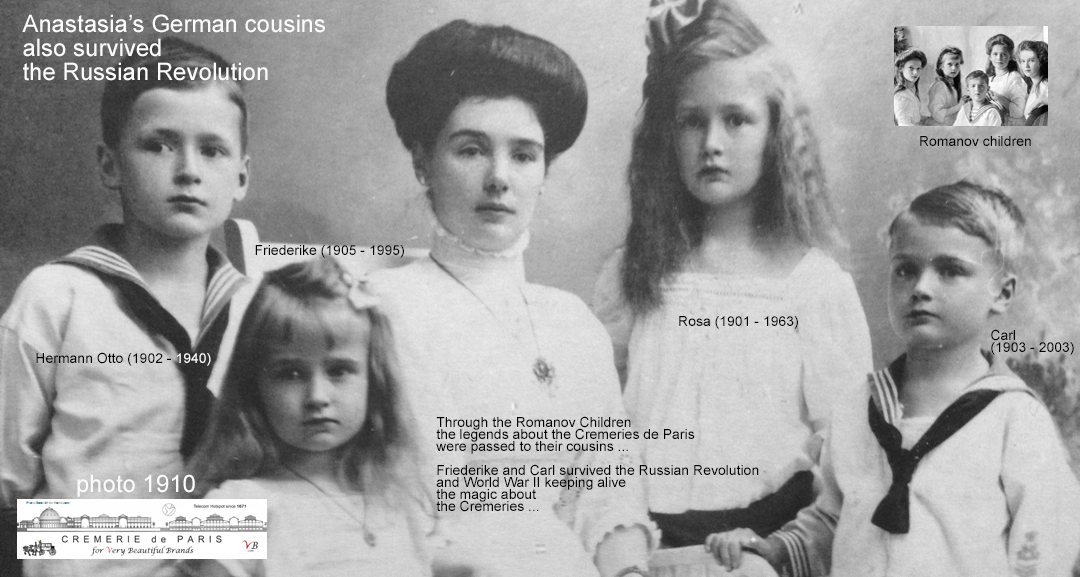 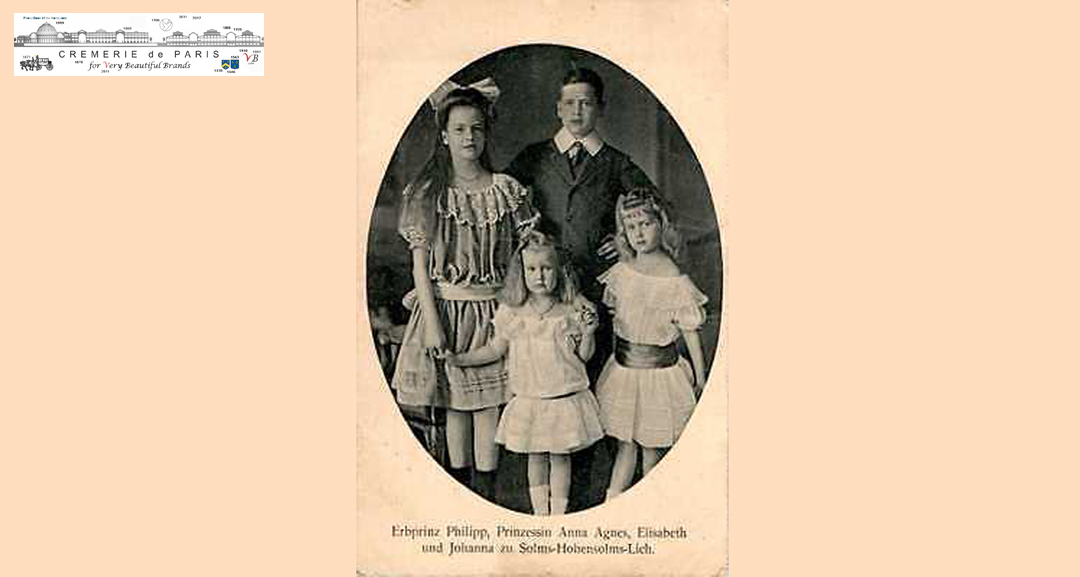 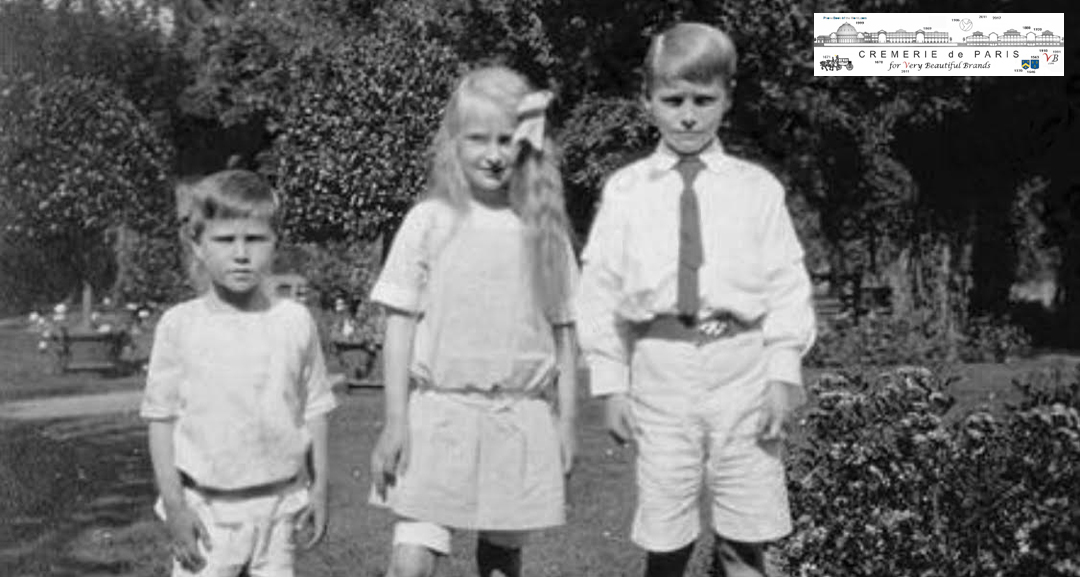 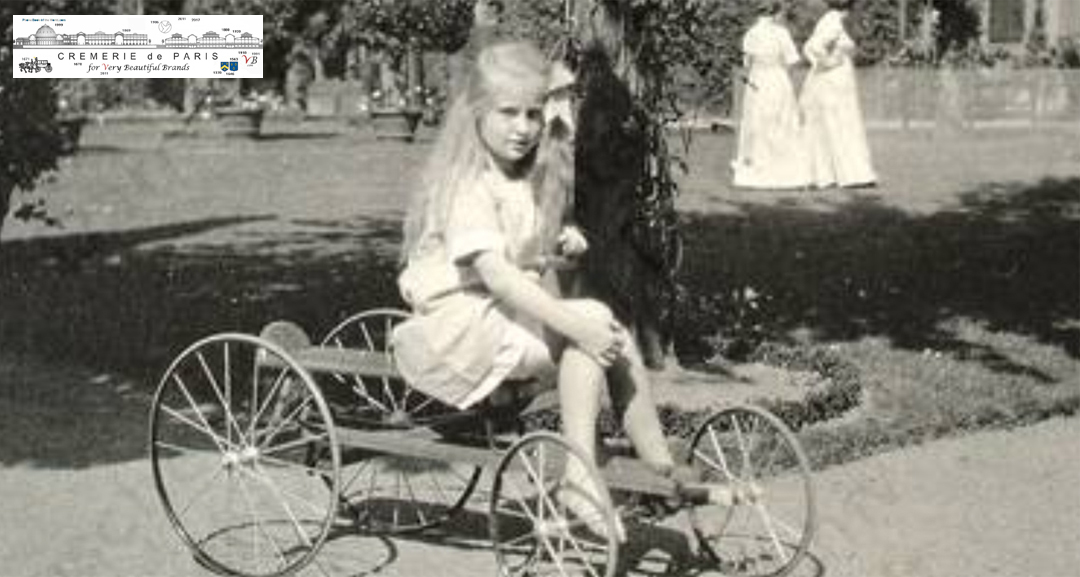 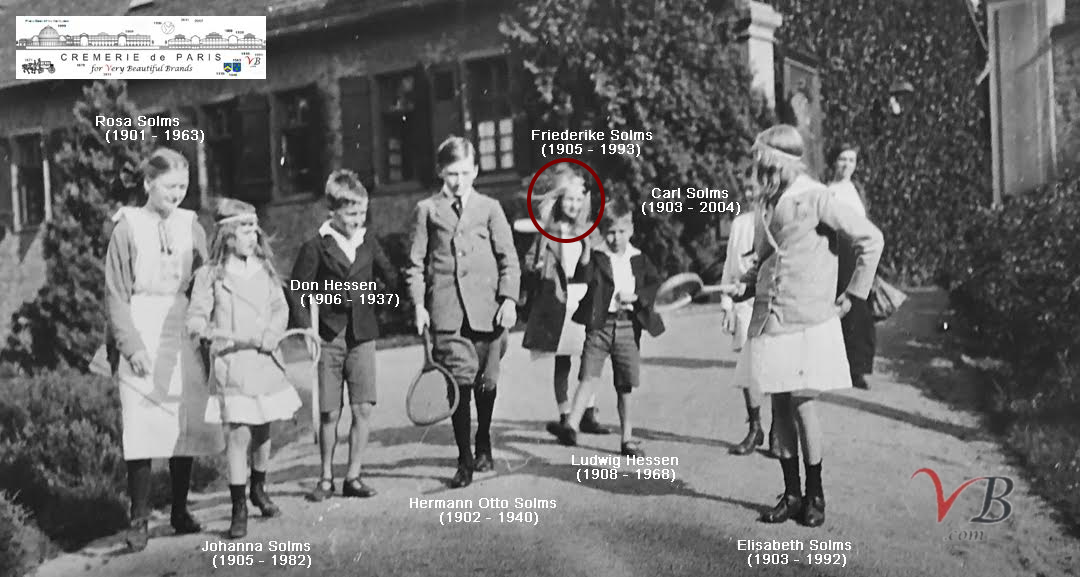 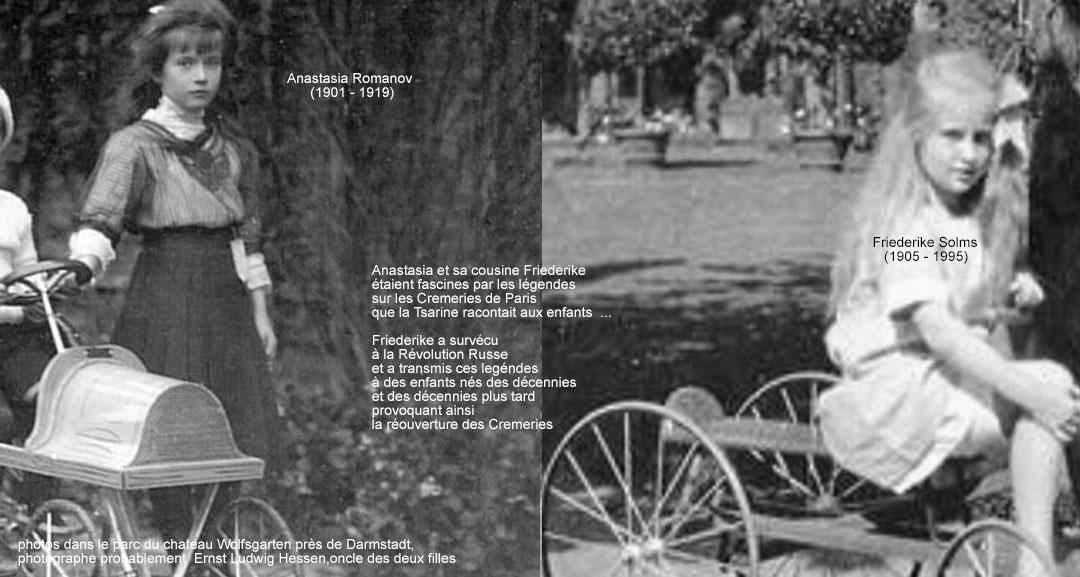 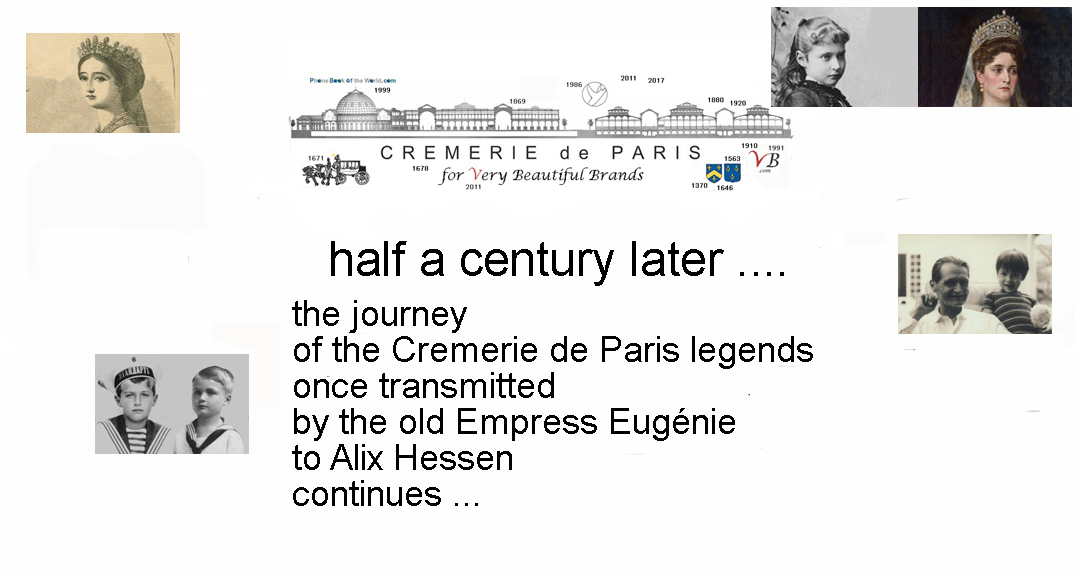 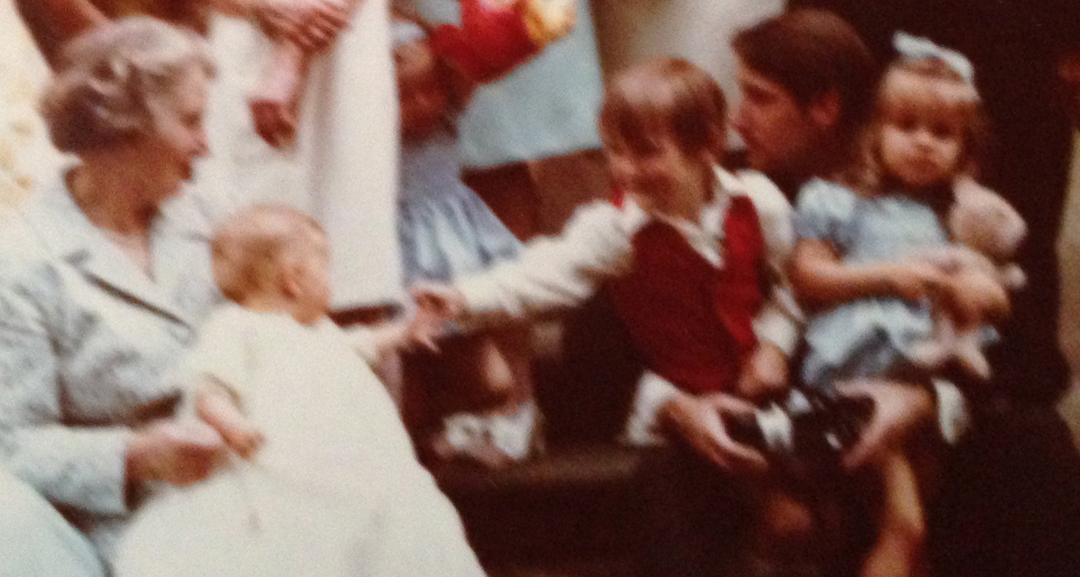 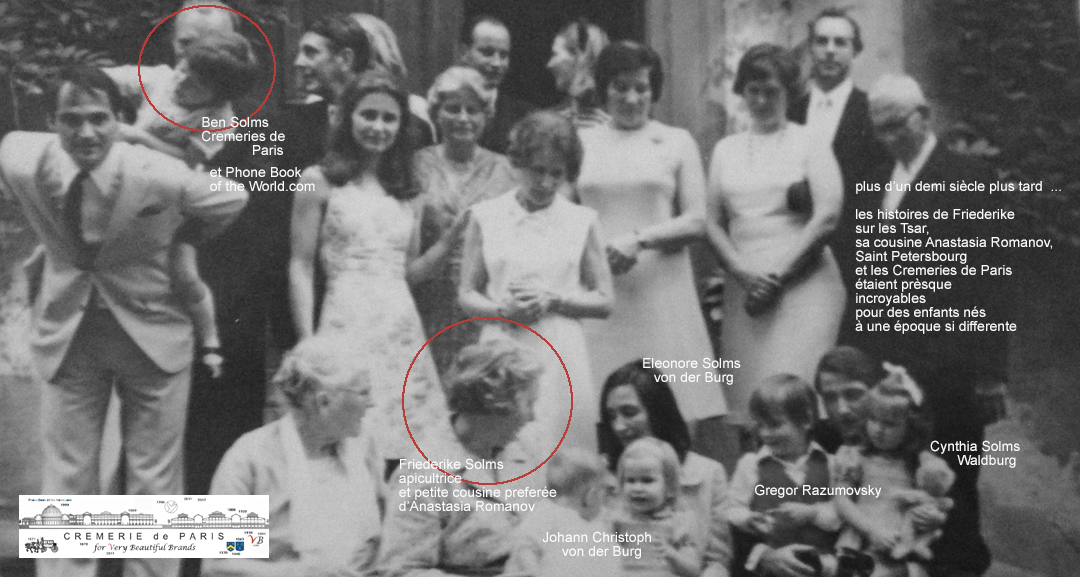 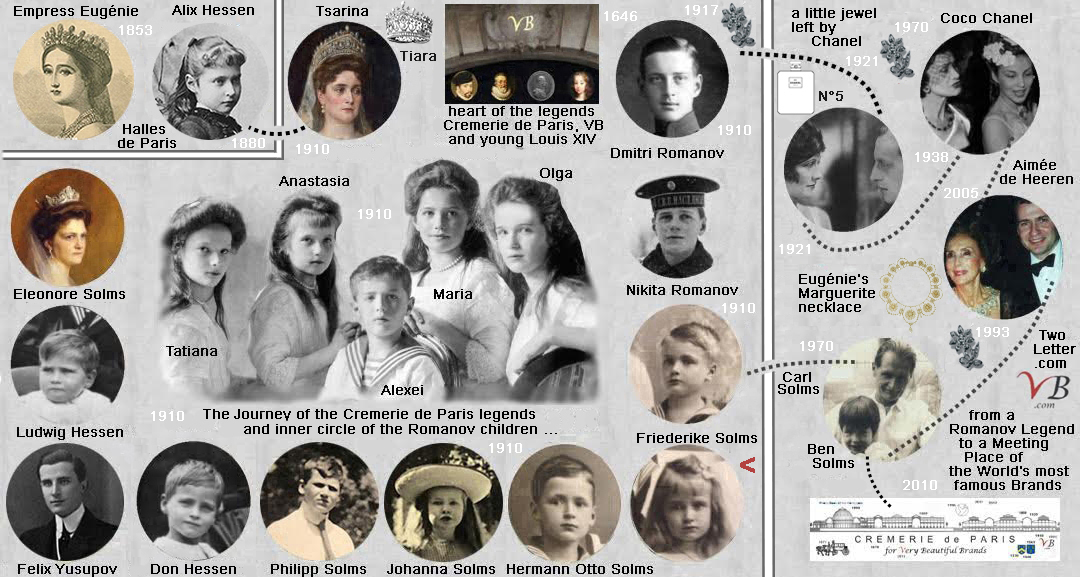 
The youngest from the inner circle of the Romanov children
Friederike Solms
was the fourth child of Reinhard Ludwig Solms,
brother of Eleonore Solms, wife of Ernst Ludwig Hessen
and sister in law of the Tsarina.
Friederike was the younger sister of Carl Solms,
she was a four years younger than Anastasia Romanov who told her about the Cremerie de Paris.
The girls copied each others hair style.
Don Hessen was one year, Ludwig Hessen three years younger.
Philipp Solms and Dmitri Romanov ten or twelve years older.
Like her brother Carl she was a "baby sitter" of the editor of this website.

In the summer 1910 Friederike was sometimes present
when the Tsarina was talking about the Cremerie de Paris.


Access to the Cremerie de Paris Legends ...
Summer in 1910
August 1910 Nicolas II and his family came to Hessen / Germany
for a long vacation. The Tsarina was suffering from health problems
and had decided to take a cure in Bad Nauheim
near her brother Ernst Ludwig Hessen and her sister in Law Eleonore Solms.

This was the time Friederike Solms became friends with her cousine Anastasia
and the other Romaov children.
It is also the time Anastasia told her about the Cremerie de Paris.
Both girls made the plan to become actresses and to live in Paris ...

During the summer vacation the girls met many times,
in Friedberg, a place where the Romanovs stayed,
but also during trips to Burg MÃ¼nzenberg, Lich, Hohensolms.
Tsar Nicolas II received wonderful cars from the Opel family
and the girls were allowed to accompany him in the car.

Was left from the summer a hat Anastasia had left to Friederike,
a few toys and Anastasia's signature in the Lich guestbook.
But when Anastasia returned to Russia in November 1910
the girls did not imagine they would never see again.

Friederike kept her in her mind all her life.
She hated Lenin for killing the children.

When Anna Anderson claimed to be Anastasia
and ti have survived the massaker
Friederike did not beleive it even though
many people did.


After the Russian Revolution
and the end of the monarchy in Germany
After World War I many things changed.
Germany became a very instable Republic. 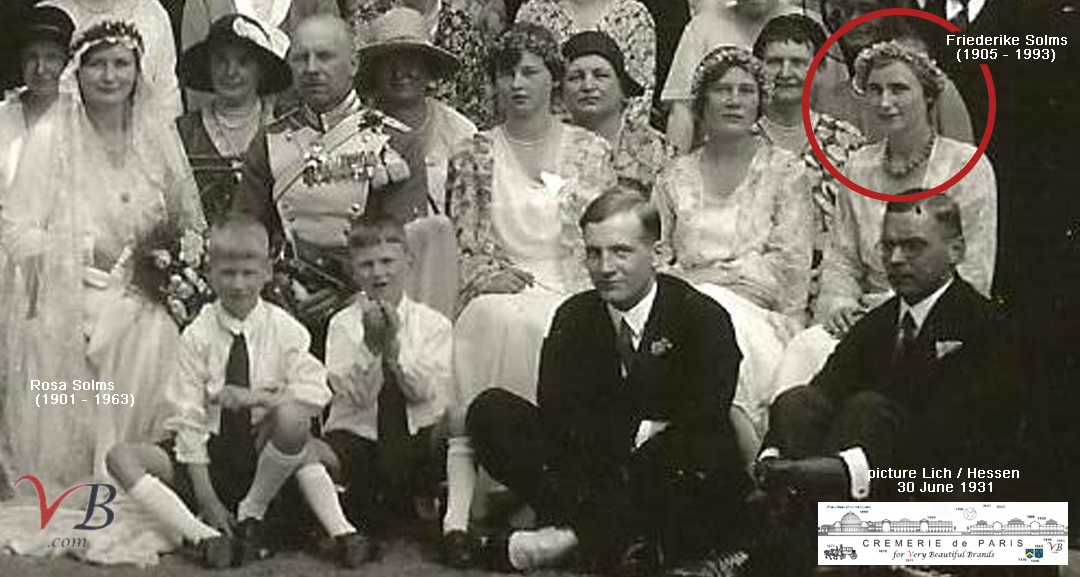 In this picture you see Friederike in 1931,
thirteen years after the killing of the Romanov children.
The picture was taken at the wedding of her sister Rosa.
Bad time were on the way for Germany ...

Not allowed to marry
Friederike fell in Love with a very good looking guy.
Unfortunatly her father Reinhard Ludwig Solms was not very open minded
and he did not allow his daughter to get married,
as her boyfriend was not from an aristicratic background.

A little later Friederike's cousines Elisabeth Solms caused a scandal but marrying
outside the rules. Friederikes destiny was to stay single.
She lived at home in the Lich castle where she had a right of residence.


Working as a Bee Breeder
Unfortunately Nicolas II had not left a few gold coins for his young niece,
so Friederike had very little money.
She first worked as midwife helping babies to be born.

In the 1970s she decided to change.
She started to breed bees and to produce honey
which was sold on the local markest and to the people she knew. 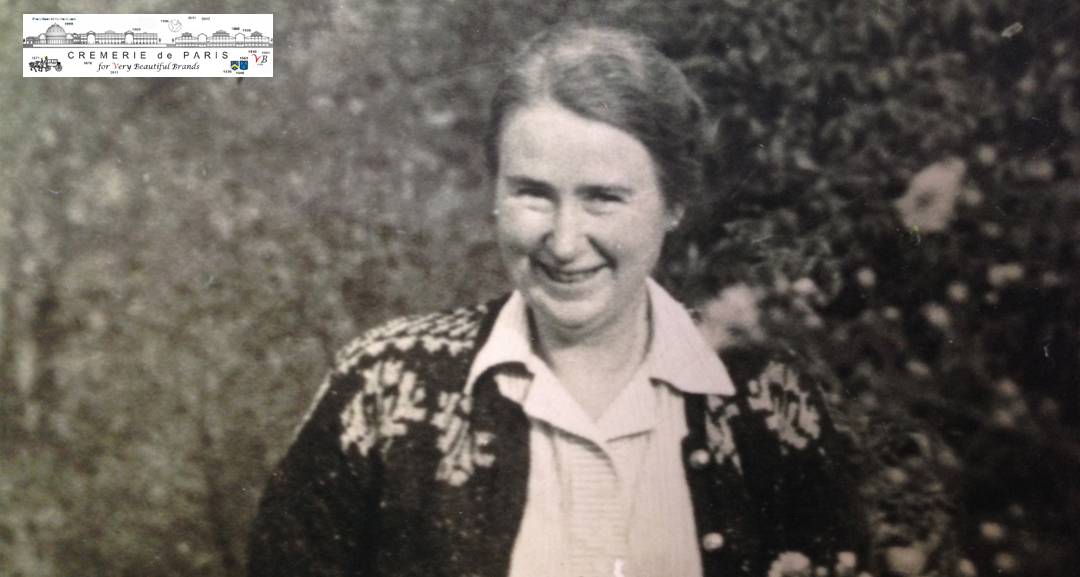 Friederike's bees were moved around and she knew the countryside better than anybody.

Transmitting the legends half a century later
Over half a century after the death of the Romanov cousins in 1918
Friederike Solms was sometimes babysitting the grandchildren of her brother ...
This is when the editor of this article had the chnace to meet her. 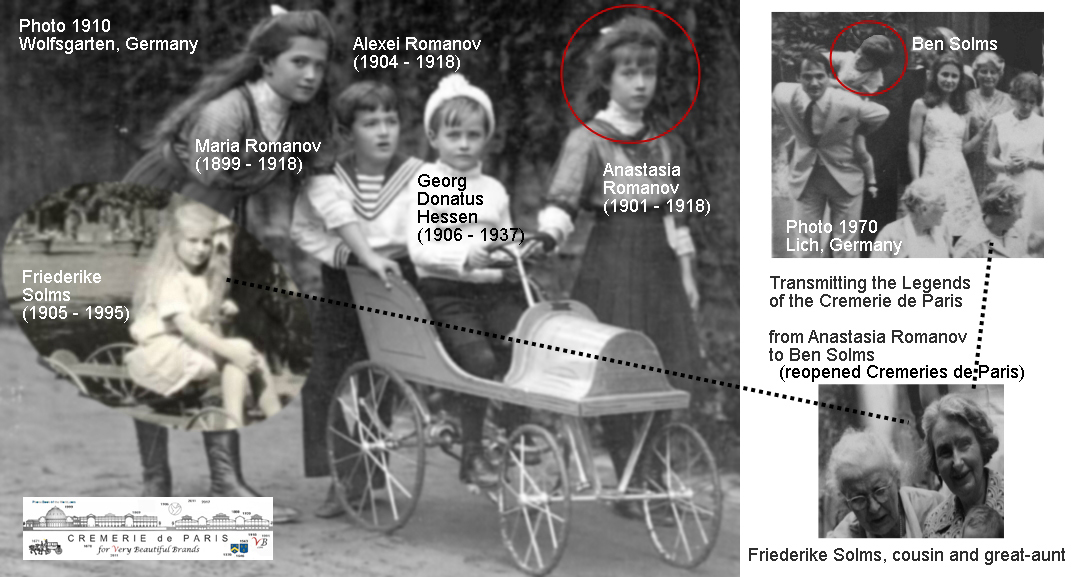 The stories about the past were completely "crazy & funny";
Imperial Russia, Raspoutine, the Romanov children
and some legends about a Cremerie in Paris
which came from Friederikes aunt, the Tsarina.

The stories were captivating ...
Like a fairy tale which was out of this world.

This image shows the editor of this article during the christening of his cousin in Lich castle.
He is in a red circle, so is Friederike.
If you look at the picture before, taken bout sixty years earlier,
you can see old Friederike ressembles the young Friederike
of the times the Romanov children were stil alive.


One of the last survivors of the inner circle of the Romanovs
Friederike Solms outlived the Romanov children for 75 years.